What a nice name!

Hope makes us live; it made Hope leave her home country and go through a very exciting and dangerous adventure.

Hope is 20 years old; she's pretty and she says that she's strong.
Hope's father died in the war and she had to take care of her old mother and two young brothers; she has been battling every day since but things aren't easy;
"You can't have a proper work if you don't have education..."

Hope met this guy; he was nice to her and seemed to be the only person to understand her fears about the future and her aiming for a better life.
He called her one day, asking to meet; she put on her best dress and went to see him by the riverside.
He was with a friend; an important man, "He looked really powerful» wearing black glasses and a nice suit made of an expensive kind of tissue.
Let's call that important man Marc.
Marc told Hope that he will provide her with a job because he runs a huge business and that he will enable her to travel and work in order to send money to her family, that all costs will be paid;
Marc was going to take care of all details...
Hope was happy, she never thought about travelling, she doesn’t even have a passport nor an ID; Actually, she never felt like these papers could help in anyway...
Marc told her that he will also provide travel documents.

Few months later, everything was set up for departure, she packed...
She met this group of girls with whom she was going to share a way more than a travel.

Girls were actually too numerous for the car;
"We had to sit inside the car like sardines"
The transportation was done in a vicious position for all the girls so many of them developed bruises on several parts of their bodies.

The journey was long; the group had to move from a car to another while going through the desert to reach Libya.
"The car stopped several times and men with guns took our phones and all our money, once in Libya we had nothing so an armed group caught us; we were put in containers and had to be quiet during the journey...They asked for money but since we didn't have anything to give, some of us called families to send money so that they free us..."

Once arrived in Libya, groups were mixed and Hope met other people travelling from other countries.

"It was supposed to be the last stop, we had to stay in a house with closed doors and windows waiting for the boat; We were heading to Italy."

The group has been staying in that detention center for weeks and the conditions were awful;
"We had no toilets, we had to pee in the same room we were sleeping; the smell was terrible... Look at our bodies; there is no blood, we didn’t have enough food..."

Hope couldn't figure out how much time was exactly spent in that center.

"A group of men came late in the night and told us to hurry because the boat was leaving so everybody rushed to the door and some people left some of their stuff..."

A smal woody boat was waiting on the beach, too small for more than a hundred people, nevertheless all of them had to get on it.
Life suits weren't available for all passengers and many started fighting to get one;

Men in charge pushed the boat and they started sailing in that dark night.

Hope was mixed with fear and confusion was all over men, women and children.

Strangers sharing the will to survive knew that their destiny is linked to each other's... 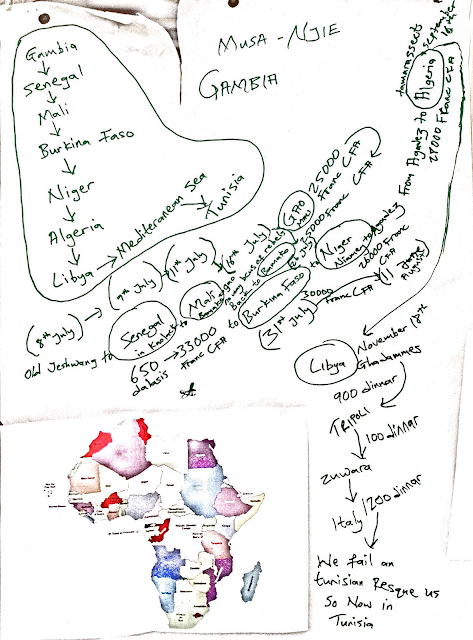