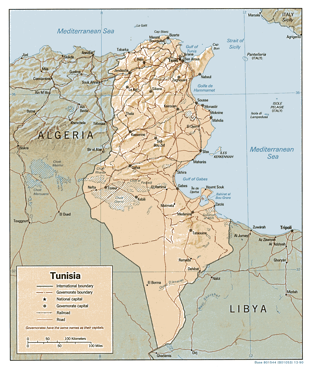 The history of the health system in Tunisia dates back to Carthage. This period had known 55 Carthaginian doctors, including a few women.

The 8th century saw the Kairouanese school of medicine, with Ibn Al Jazzar (5) who wrote several works of central medicine a great social predisposition unusual at the time, in particular with his work of medicine intended for the poor.

In the 14th century, Tunisia knew the "Al-TabibAl-Skolli" which was a line of Tunisian doctors who taught medicine at the Zeitounaand practiced in "Moristan" founded by the King of Tunis AbouFares AbdelAzizfor the benefit of the poor.
Among the “Tabibs As-Skoly” some wrote the best medical and pharmacy treatises of their time.

Then, in a more recent history, in the 16th century, we retain the fight against maraboutismvia the creation of health structures such as the Aziza Othmena hospital, the first example of a psychiatric hospital in the Tunisian context, initially housed in the rue des Tunisians "AZZAFINS" (musicians), where the patients received upon their discharge, sums of money to compensate for their time of inactivity due to hospitalization and where musicians played music to brighten the minds of the sick.

The Tunisian health system experienced during colonization, the introduction of new Western medical concepts, with a new way of doing medicine as well as the creation of new health structures mainly for the colonizers and the Pastor reaserchInstitute.Therehas been a « transplantation of the hospital-basedhealthcare system to developingcountries and the lackof emphasison prevention» (6)

During this period the democratization of access to health was not on the agenda since the colonial context did not lend itself to it. Thus, health structures had only been developed in regions of economic interest to colonizers.

This patriotic ardor was accompanied by a political desire for equality which allowed the construction of the Tunisian health system with the development of several small local health structures and the development of many regional and district hospitals as well as the design and establishment of national prevention and reproductive health programs.

Post-colonial Tunisia had adopted, like all southern countries, the biomedical model preached by Western countries in the 19th century and reinvigorated with scientific discoveries and technological innovations post WWII.

In the first years of independence, the health system therefore focused on disease management and epidemic control. A social system has been implemented and the health system was directly conceptualized as a 2ndgeneration health system insisting on the the promotion of primaryhealthcare as a route to achievingaffordableuniversalcoverage, usingmainlysmallproximal structures; in orderto  ensurea minimum levelfor all of healthservices. There has alsobeen a focus on education(7).

In 1987, a putchhas been doneby Ben Ali (second president) andsincethentherehas been a change in the approach.

During this period, public health facilities did not see any noticeable improvement. This stagnation has been accompanied by serious operational problems, affecting the availability, quality and safety of services.

By keeping a vertical and centralized management mode, no autonomy was possible for public health establishments created in the mid-1990s.

At the same time, the private sector has been strongly encouraged. Private clinics were establishing themselves in increasing numbers in advantaged areas which were still urban and coastal areas.

This same health policy continued after the revolution of 2011; the growing deterioration of public structures goes hand in hand with the increase in the number of beds in the private sector, which has even more than doubled since 2011, while still remaining outside disadvantaged areas.

Following the independency many fact had an impact on tunisian demography:

The abolition of polygamy, whichtookplace sinceindependence(1956) associated with a family planning policy and progress in the health system lead to a demographic and an epidemiological transitions.

The demographic transition in Tunisia:

•A growth in the country's total population: from 3,780 in 1956 to 11 818  million in 2020 (nearly4 times).(10)
•A change in the age structure of the population: the number of over 60 years was 6.7% in 1984 to 12.96% in 2019 (11)
•The decline in infant mortality has resulted in an increase in life expectancy at birth, which went from 37 years at the end of the 1940s to 52 years at the end of the 1960s and to 74.5 years in 2009(10) and 76.699 in 2019 (12)
Epidemiologic transition in Tunisia:
•Decline/ eradicationof "traditional" transmissible diseases(malaria, bilharzia, trachoma, tuberculosis, infectiousdiarrhea...) and thoseof infancy(polio, tetanus, neonatal, diphtheria...).
•In 2002, non-communicable diseasesconstituted79.7% of deathsand 70.8% of the diseaseburden(10)
•Emergence of non-communicable diseasesof chronicand degenerativetype, witha multifactorialetiologyand at a high costof treatment.
•An upsurge in road accidents with their consequences in terms of mortality and morbidity
Basic indicators in 2018:

-Health expenditure per capita is 252 dollars (15)

INPUTS OF THE TUNISIAN HEALTH SYSTEM:
Financing of the health system is based on 4 types of funds (2014)(16) 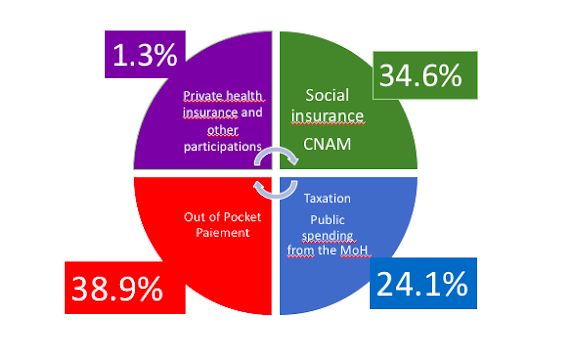 When considering total health spending by the public sector(defined as spending by the State and by compulsory social insurance schemes), there is a noticeable decrease in public spending, replaced by an increase in the portion of private spending.

2-Out of Pocket paiement:

Public Fundingfromthe Ministry of Healthisthe main public fundingand constitues 24.1% of the THE in 2014 (16) It is a global operating budget.

There is a very low enrollement in private insurances in Tunisia.

Private health insurance and some fundings from other ministries like social affairs had a share of current health expenditure of 1.3% in 2014 (16)

Protection against the financial risk of illness was strengthened with the creation of the CNAM during the 90s, which was to support both public and private sector services.

However, it is the private sector that benefits the most.

•Free care: This categoryisdefinedaccordingto the povertyline and ismade up of the targetfamiliesof a permanent assistance program.
•Beneficiariesof reducedrates: The grantingof reducedrate cardsisgrantedon the basis of annualfamilyincome, takingintoaccountthe size of the family.
•Thecoveragerate is100% for civil servants (CNRPS) and reaches95% of eligibleworkersin the privatesector.
•Arecentstudypublishedin 2019 shows that17.2% of the Tunisianpopulation (estimatedat 11,295,787 people in 2016) do not have anysocial coverageagainstthe disease.
•There are marked inequalities in access to healthcare: the latest studies report that17% (nearly2 million Tunisians) are neither covered by the National HealthInsuranceFund(CNAM) nor by Free MedicalAssistance (AMG) and therefore do not have any social health coverage.

“Access to health services differs depending on the protection regime: beneficiaries of free healthcare and reduced rates are entitled only to public health structures, while social insured have the choice between three channels giving them access either to public providers or those in the private sector. »

beneficiaries of free healthcare cannot access healthcare in the private sector and sometimes have difficulty obtaining or renewing cards.

OUTPUTS OF THE TUNISIAN HEALTH SYSTEM 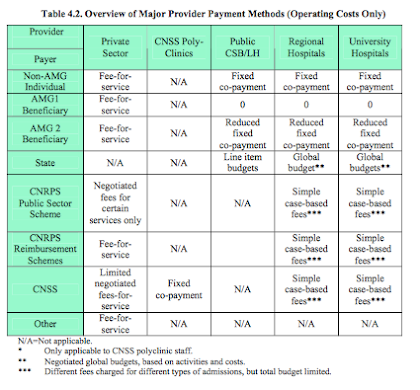 MOH pays regional and university hospitals on the basis of a global operating annual budget.

The social security which covers public employees pays for care in regional and university hospitals on the basis of a simple case-based fee system but within the context of a global budget.

Individuals and many private insurance companies, pay on a fee-for-service basis.

Provider payment mechanisms in the health sector tend to be dominated by fee-for-service, salary, and global budgets. 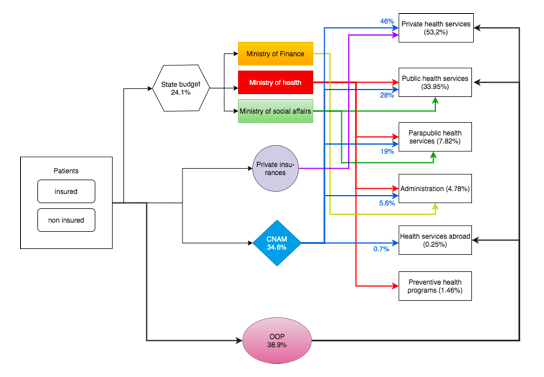 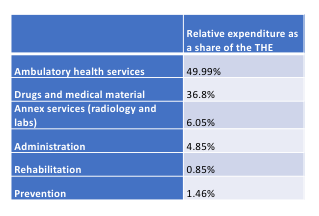 The private sector is rather flourishing but very unevenly distributed over the territory. It remainsfinanciallyinaccessible for the vastmajorityof Tunisians.

The public sector provides the majority of health services: two-thirds of consultations and 90% of hospitalizations but has less funds than the private sector.

And has a limited service package because of rationing and shortages due to budgetary constraints, linked to the inadequate use of resources and the insufficient and capped contribution of the CNAM.

Without forgetting that the funds of the CNAM are often used to makeup the deficit of the social funds and are thus deviated from their real objective.

These activities are marginalized in a public sector which has become very hospital-centered and oriented towards curative care.

According to national health accounts, even the budget allocated to prevention in Tunisia is very marginal.

OOP expenditure are mainly directed to the private sector and is distributed as follows:

It is also interesting to note that there is no data about the informal paiements knowing that these tend to be more frequent in a corrupted system.

EVALUATION OF THE TUNISIAN HEALTH SYSTEM: 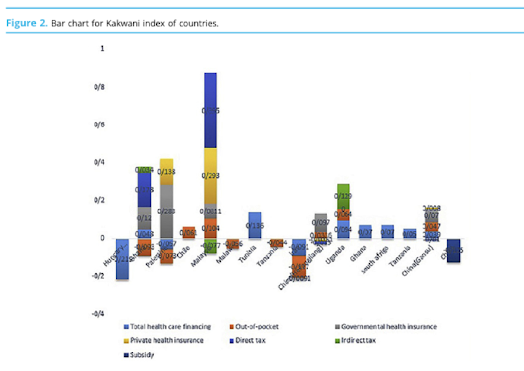 Kakwani index is positive in Tunisia indicating a progressive healthcare financing system. The rich pay more than the poor for their health services and the country established free healthcare services for people below the poverty line and reduced wages for people earning the minimum wage(20)